In the 1970s and 80s there was word on the street of a man, a man like no other. Criminals didn’t dare speak his name. He was like some mad cross between Magnum PI, The A Team, Bergerac and Juliet Bravo. He was Kelkowski. Whenever a crime was solved by dubious means, whenever a criminal disappeared “to the Costa Brava”, whenever a witness to police brutality lost their memory, there was Kelkowski.

Then came the 90s and a spate of high profile legal cases of proven wrongful imprisonment – The Birmingham Six, the Guildford Four, Jeffrey Archer… Well, Archer was originally fitted up and it was dumb luck that he genuinely was guilty. These cases ruined Kelkowski and he left the force. His high profile victories ruined. He found comfort with his friends from the 70s and 80s; respectable men, men of substance, men of charity, men like Dave Lee Travis, Rolf Harris, Jimmy Saville.

After a few more rough years helping colleagues with their enquiries, Kelkowski has finally come forward and gone public to reveal, for perhaps the first time, a genuine shocking truth. Kelkowski is two men, Jay Kelly and Ian Kulkowski, the former of whom has, with the help for friend Jim Davidson, moved himself to the middle east while the latter has retired to the far less welcoming wilds of North Wales. Both are suspicious of the press after two decades of bad publicity and so our conversations become a mess, almost impossible to piece together. 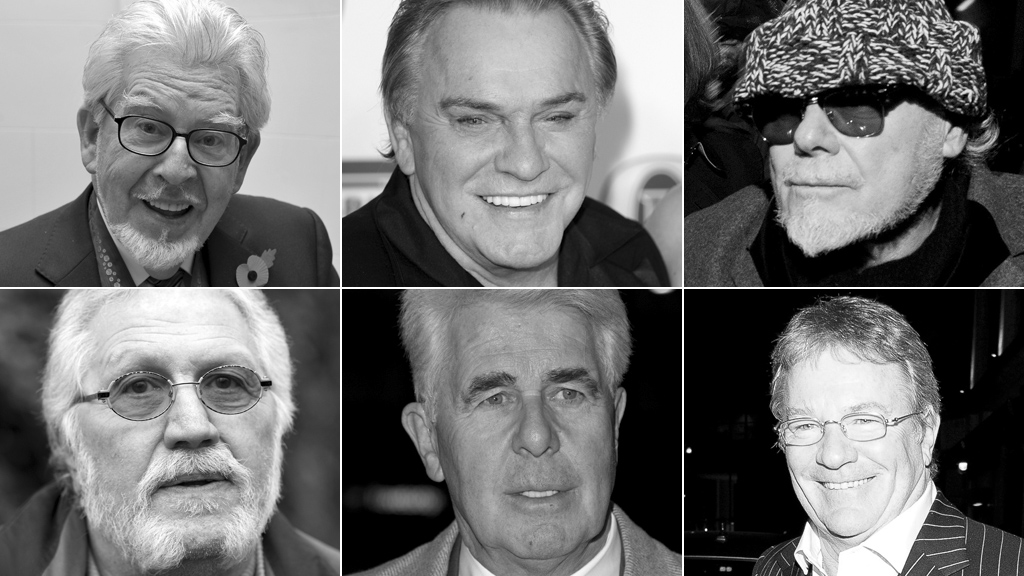 Definitely Not Friends of Kelkowski

I started by asking about their relationship with Saville but they quickly asserted they would not be talking about Yewtree or miscarriages of justice or anything any normal person would actually care about, which is how this article ended up where it is – on the league website of a Dynasty Fantasy Football League. What follows may appear to be a mass of contradictions and non-sequitors, it may be disjointed and, in places, unintelligible, but that is perhaps the fairest reflection of the men at the centre of this storm. Don’t expect to read anything you’ll care about in what lies ahead.

I did, however, manage to get a couple of questions in about their beginnings. So how did Kelly and Kulkowski wind up together?

“I’m not sure,” says Kulkowski, confused. “I certainly didn’t choose it.” He sounds a little disgusted with his partner, but he clearly put a brave face on it. “I went away for a while then came back and I was paired with Jay,” he continues, referring to his suspension in 1975 for cocaine possession (unproven). “I’m a team player though so I’m happy working with anyone.”

Kelly, for the record, has a different slant. “We’re a dream team. I look at this as being a perfect partnership. Apart from the time difference. And our past performance. And the lack of organisation within the team. Or having the slightest idea what we’re doing. Still, if you add our combined wins up from the Chatterbowl and our scattergun draft approach in the same competition, we match up with most of our competitors. Individually we didn’t do too well, but combined we will be unstoppable (or much much worse). We have no expectations, other than dominating our opposition on and off the the field. Or not.”

It was at this point I realise they were serious about the whole “No questions about the police stuff, it’s fantasy football all the way” provisos they had laid down, and I considered stopping things right there, but journalistic integrity/the knowledge that I could probably spin this for a quick buck somewhere led me to continue.

Kulkowski continues: “Joint decisions have come easy so far and while I’m sure there will some difficult debates down the road so far everything’s rosy in the Kelkowski garden.”

While they continued to jabber away, I did a quick bit of research and turned up the Chatterbowl league Kelly referred to. Both Kelly and Kulkowski were new members of the fantasy league in 2013, and apparently they are now teaming up to co-manage a Dynasty League team in the DynaBowl and relive the olden days. As new members, was there a steep learning curve and what are they taking from the Chatterbowl into the DynaBowl?

“From my end I found it tough,” says Kelly, “because I’m not some sinister NFL hermit who makes spreadsheets and does in-depth analysis for publications.  Who has the time to watch every single game?  What kind of a sick freak actually watches the combine?”

Tough indeed. My research tells me that between the pair of them, they secured 7 wins in 26 regular season games. A pitiful return. It doesn’t bode well, I say.

“Depends on your definition of success,” says Kelly again, “I drafted guys and I didn’t quit on them, unlike some of my peers.  I also didn’t get trade raped.  I will, however, never forget a tie being turned into a defeat by the racists at the NFL and ESPN.”

Kulkowski has a different persepctive. “Did we really only win 7 games last year? Jay must have been terrible. In my head I did a lot better than that. Though from my perspective I had an awful draft. My first 4 picks were Steven Jackson, Steven Ridley, RG3 & Randall Cobb. So I guess it’s a wonder I was able to cobble together any wins at all. Shows my underlying managerial potential. My best pick of the early rounds was Knowshon Moreno, who I quickly traded for MJD.”

It’s that kind of form that found other GMs speaking derisively of Kelkowski’s chances in the upcoming season. I wonder what the pair think of having their methods questioned and if they’ll change anything in response.  The Kelkowski of the 80s comes to the fore in Kelly.

“Kelkowski will do what Kelkowski wants to do.  We don’t kowtow to the suits in the league office and we don’t listen to the insults of internet weirdos.  If any of our fellow GMs want to make something of it, we’ll show them some old school street justice.  In terms of the responsibilities that come with the job of GM we both take it very seriously.  We even created a spreadsheet, which, I think you agree shows our strong commitment to the team.”

It’s clear which side of the partnership harbours the attitude when Kulkowski jumps in with his response, which is much more mild-mannered and even tempered than his partner’s. “The disrespect that’s been aimed towards us from some camps makes me laugh. I think other GM’s will have enough to worry about rather than wasting energy taking swipes at us. For me it’s a sign that they’re worried. Fear is driving such behaviour and to be honest it’s justified. Fear of the unknown.”

That said, when I ask about objectives for the season ahead, it appears Kelly has rubbed off on Kulkowski just a little bit. “There can only be one objective and that is to win it all every year. There’s no point in being involved otherwise. Kelkowski will have one aim and that will be to dominate the dynabowl year in year out. We will be the leagues phill Taylor if you like.”

But then Kelly takes things one step further. Some might say over the line, but not Kelkowski. “I want to trade rape at least one person, preferably David Slater.” It’s not the kind of thing you necessarily want to broadcast but, if the 80s taught us anything, it that that’s just not the Kelkowski way.

Given the pairing’s reputation, are we to expect any fireworks or trademark ‘maverick’ moves at the auction?

“You can expect actual fireworks, theme music, and possibly a surprise celebrity appearance,” promises Kelly, while Kulkowski goes one step further: “My main focus in the auction will be unsettling the other GM’s with my nominations. Too much focus is paid to the bidding process but the real victories are had when you force someone into a massive panic buy with a left field nomination or make them pass on an undervalued player because they’ve just wasted said dollars. The auction is a massive psychological battle on many levels, it will take a strong willed and highly manipulative GM to come out on top, and that’s exactly who Kelkowski is.”

Kelly pipes up again, anxious to stress that they have a fully rounded auction plan. “I think it’s well known that we are all about players with amusing and/or interesting names, as well as those that contain apostrophes or extra capital letters. We’re also looking at young players with a good future ahead of them. And Tony Romo.”

Now one thing that everyone knows about Kelkowski is their attitude to rules. So what do the pair make of the extensive rulebook laid out by the Commissioner?

“It’s clear that Kelkowski doesn’t care for rules, the suits in the league office, or authority of any kind.  We make our own rules (within the stringent rules set for us by the suits in the league office),” says Kelly, and Kulkowski tows the party line, “My approach to the rules is very much in keeping with the Kelkowski mantra. I will ignore them and do my own thing until someone tells me I’ve done something wrong. Then I will ask what the rules are and what I should do differently and just pretend I didn’t know. It’s an easy excuse given the rules are so complicated.”

So what does the season hold in store for us then? Kulkowski is eager to place any underperformance firmly away from his door, saying “I’m strongly of the opinion that fantasy success is 85% luck which means anyone can win. That’s part of the appeal for me. Even Ben [Archer] or Geoffrey [Manboob – apparently a person] could win it. Anyone. Except [David] Slater. He will never be allowed to win. Even when it looks like he is cruising to victory so higher powered intervention will take place to ensure he fails. The league could not cope with a victorious Slatz. However, this also means anyone can also finish last no matter how ‘good’ they or anyone else thinks they are. You are only ever a couple of injuries or lineup changes away from disaster.”

Kelly is equally adamant about David Slater. “I would love to get one over on Slater. He’s a terrible human being.”

And with that they hang up, and I am left trying to make sense of the gibberish and find somewhere to make money from it all. I have failed.