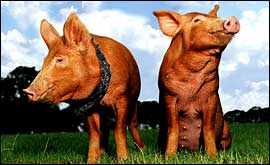 In January 1998, two Tamworth pigs escaped as they were being unloaded at an abattoir and went on to become a national and international cause celebre. Subsequently named Butch and Sundance, the pair were spared their certain death when The Daily Mail bought them and their exclusive story. Sixteen years later, their story is just a distant memory (the pigs died in 2010 and 2011 aged 13 and 14), but it comes rushing back to me when I ask Mat Ward and James ‘Goody’ Goodson about their DynaBowl franchise. Despite being awarded the an organisation in the fantasy NFL start-up, the pair have yet to name or locate their team and I want to know about their plans.

“Has anyone taken Tamworth?” asks Ward, an experienced tri-athlete and clearly the ‘Butch’ of this partnership, “Is Tamworth still available?”

At least the pair are singing from the same hymnsheet. “Tamworth? I hope Tamworth is available. It’s the type of intimidating locale we should be aiming for,” says Sundance… sorry, Goody.

It’s difficult to tell if they’re serious, but if the stadium plans on display in their office on the 85th floor of The Shard in central London is anything to go by then Tamworth is in for some serious regeneration. The 250,000 capacity stadium would be the largest in the world, something truly unprecedented, but at the moment it is only a pipedream.

As they appear coy about the plans for their franchise I change tack and ask about their working relationship.

“Our working relationship is very much in its nascent stages,” says Ward. “Although, I think we are agreed that James is the Head Coach and I am the waterboy.” Goody is a little more candid. ” I don’t think there will be one lead, more of a synergy of visions. A dynamic hybrid of wit and cunning. Our relationship will be the definition of ‘nuanced’. I don’t even care if that doesn’t make sense.”

It’s clear they are close. Their office features two offset desks pointing in opposite directions; between them what’s normally referred to as a ‘kissing bench’ ensures the pair are always on hand to each other. 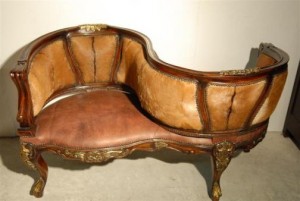 Goody sets the bar high for the partnership. ” To summarise, I think Mat and I will be the best joint managers since Steve Gritt and Alan Curbishley took over Charlton in 1991. You have been warned.”

Of course, the close working relationship can’t last, with Ward due to return to America in under a month, narrowly missing out on a chance to attend the DynaBowl auction in Sheffield on July 12.

“I’d love to make an appearance at the auction, but unfortunately it’ll have to be via video conference rather than in person,” he laments. But being bi-continental has its advantages. “With the time difference we will be able to work on our team approximately 20 hours a day without losing sleep.” It’s also clear he’s also been learning from the best: “We’ve managed to have a brief conversation or two with some league connections. I can’t reveal any names, but I will say that I’ve picked up some tips on spying on NFL teams in training.” 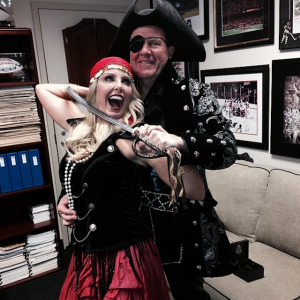 Belichick – “An inspiration and Adonis”

Goody agrees that a man on the ground across the pond will be advantageous, but it’s also obvious he expects a lot from his colleague. ” I like a tight ship. I would be disappointed if I don’t have a scout report in my inbox each Friday after Thursday Night Football from Mat.”

The light tone of the conversation comes down a little when I ask about their preparations. Both men took charge of teams in the Chatterbowl in 2013 and will be doing so again in 2014, but the DynaBowl is a whole different beast – one of Mason Verger’s killer pigs to the Chatterbowl’s sweet Tamworth piglets. So how do they feel their experiences in the Chatterbowl will prepare them?

” I love two things in life,” says Goody, “Hazing and spreadsheets. Both are mutually beneficial to the NFL. I enjoyed learning about it as a complete noob and got sucked in to reading several blogs or columns a week about it. By about 3 weeks in, I had a few spreadsheets on the go and knew who was under performing and who I wanted in the free agency.”

His preparation and research paid off as he went to the playoffs as the number 1 seed, but a disastrous 56 point performance in the semi-finals put paid to his title dreams, eventually securing the 3rd place finish. “It was tough and I still have limited knowledge on the whole thing,” he confesses. “In one way our inexperience may help us see the wood through the trees. Or maybe blow up in our faces with more busts than booms.”

Ward wasn’t quite as successful, narrowly missing the playoffs in a tight division that came down to the last week. He subsequently ‘won’ the loser ladder and a 9th place finish in the league. ” It was a pretty steep learning curve but part of me feels that coming to league with no preconceptions helped. It will be good to start the new season with a broader knowledge base of players. The big difference is the inclusion of defensive players. I’ve head of this Revis guy and the bully guy but that’s about it.”

Of course, you shouldn’t take those statements at face value. The approach of the auction means it’s every team’s duty to sell misinformation about knowledge and targets. Underestimate these two at your peril.

” James Goodson is one of the sharpest minds in fantasy sports. I’m relying on him to pick up most of the Denver Broncos’ offense remarkably cheaply again,” says Ward, referring to Goody’s Chatterbowl strategy.

One of the targets that it’s pretty well known they’re keen on is Andrew Luck, but recent analysis has shown he might not be the valuable investment people think he is. What do the pair make of that?

Mat takes the lead: “Andrew Luck is the greatest prospect since Elway. Good ‘Luck’ outbidding us for him.” But as he says it the air turns heavy. Is this the first sign of troubled waters in Tamworth?

“Mat took my only Andrew Luck joke,” says Goody, through gritted teeth, before letting on the terms he might consider sinking to should they be out bid for the QB of his dream and be negotiating a trade. “It’s no secret that I [will] suck for Luck.”

And why does he view the QB nicknamed Andrew The Giant? ” He’s an all round nice guy who falls within a nice ethical framework for our franchise. Which will probably be based out of Tamworth. No racists, no bullies, no safeties that have got away with homicide. You get the picture.”

So this is a franchise that will be investing for the long term? “Seriously, I think it’s a trap to get too focused on the medium to long-term and be always playing for 3 seasons’ time,” says Ward. “The key focus should be on the upcoming season.”

” Mat is right,” says Goody, the storm clouds now passed. “You can’t be too caught up on the long term. Even the most ardent Draft scouts regularly get it wrong. The average peak for most players is only a couple of years, which means, although it’s a high risk environment, the continual turnover of the next ‘big thing’ is pretty accommodating.”

“Still, that doesn’t mean I won’t be turning up to Sheffield with several spreadsheets, my Bluetooth headset on, and Mat on speed dial. We will have the best war room. As Mat always says, buy cheap, buy twice. We want the best players.”

As frequently as the pair speak as if they are the left and right sides of one brain, ever so often a disparity seeps through, as happens when I ask the key questions.

Who are the pre-auction favourites?

Goody: Whoever gets Andrew Luck.

Ward: Us. Next Question.

And what’s a realistic goal for the team going into the inaugural season?

Goody: To have a jolly good time and try our best. Hurrah!

Either way, for Butch and Sundance, the DynaBowl is jumping in at the deep end.

Ward & Goodson dive into the DynaBowl