The question everyone is talking about at the moment is who is going to win this year’s Dynabowl?  When Bendy’s poll first appeared on MFL I excitedly scanned through all of the rosters (I do love a good poll) and determined that Max & Mike seemed the strongest.  I plumped for Mike on the basis of Zeke, Hunt & Freeman at RB, and that was that, decision made and I could now move on with my life.

But no.  That was not the case.  My mind was now racing – have I made the right call?  Have I given enough consideration to Defense, or Special Teams for that matter?  I vowed that this unsubstantiated selection simply won’t do and I needed to look deeper in order to be truly happy with my selection.  And so here I’ll run you through my results and determine once and for all who will win the 2018 Dynabowl.  The results might just shock you to the core! (They won’t).

I wanted a simple method of deciding who had the strongest roster (and more importantly starting 22) so I decided to use positional rankings to determine who was strongest at each position and then use that to guess who is best overall.  Once I started I quickly realised this was a pretty pointless exercise but I’m not one to abandon these kind of fruitless ventures so I ploughed on.  I suppose it ultimately did give me and understanding of where everyone’s strengths and weaknesses lie, including my own, which may help in identifying potential trade opportunities.  Which is good especially seen as I’m such a big trader!  It also proved to be useful prep for the upcoming C’Bowl draft, which seen as my C’bowl record is currently second to none could be quite important.

Speaking of which I really need to improve my early round draft record in the C’Bowl.  Here’s my first two pick in each of the 5 years I’ve been part of the league –

How fucking terrible is that!!  Only 2 finished top 10 at their position (one of whom is Gronk! Duh!) and only 2 more top 20!  I even picked Gurley when he was shit!  No wonder I never make the playoffs.  But look out this year as I’m now fully prepared to not repeat the mistakes I’ve made over and over for the last 5 years!

Where was I? Oh yes, Dynabowl rankings.  We’ll start with the Offense as they are much more easily and reliably ranked.  I used fantasypros consensus draft rankings to rank each position then used those classify each player as one of three categories –

I’ve ignored everyone else who is rostered as they are either likely to development stashes or just guys you have a crush on and like to have around (hello 2016 Dynabowl winning QB El Jaguar!). So without any further ado let’s get into it….. 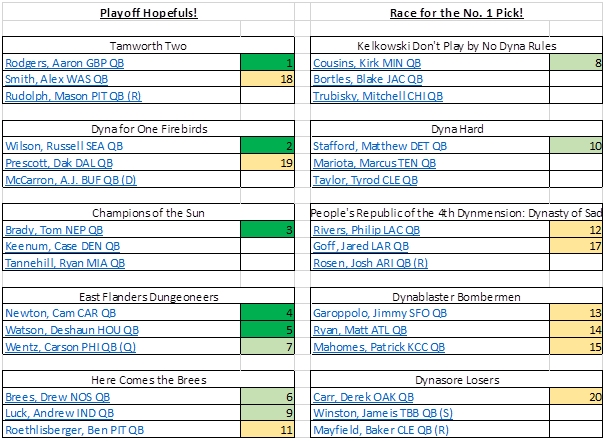 I simply ranked teams QB’s by the ranks of their no.1 as we only need to start 1.  So T2 come out on top with A.A.Ron.  According to the rankings there are 3 teams with no starter quality QB’s – Sadness, Bombermen & Losers, with the Losers barely scraping even a back up in Derek Carr.  Although Bendy’s QB crew are all ranked 13-15 (nice grouping) you could easily see 1 of them breaking the top 10, or even 5.  There will certainly be some selection headaches in the weeks to come! 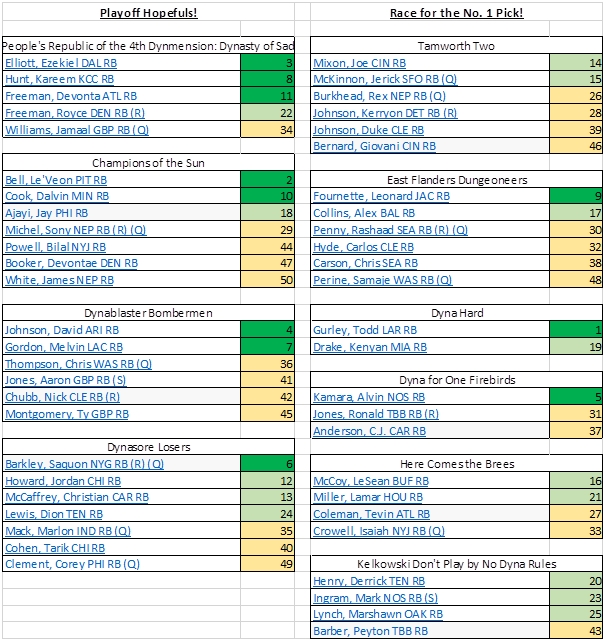 Max and Bendy both have 2 studs at this crucial position so look well set but they are bettered by Mike with a group boasting 3 studs plus one extra starter!  All those years of early picks are beginning to pay off!  Slatz scrapes into playoff contention here with 1 stud backed up by 2 highly ranked starters.

Things don’t look great for me and Bean here with no studs and a few lowly ranked starters.  Some attention is required here.  Meanwhile Chris’s reliance on No.1 ranked RB Gurley (where were you in 2016??) and his strong WR corps is stark as he has only one other RB ranked inside the top 50, and that’s Kenyan Drake! 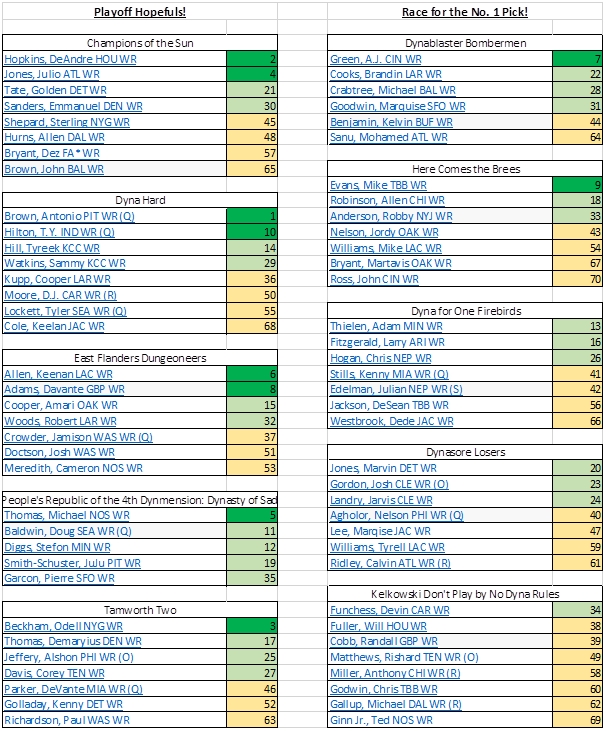 This is Ian’s 4th table

My deficiency at WR is clear to see with only one starter rostered.  Slatz is not too far ahead although his strategy of playing the long game with Josh Gordon could finally be about to pay off. 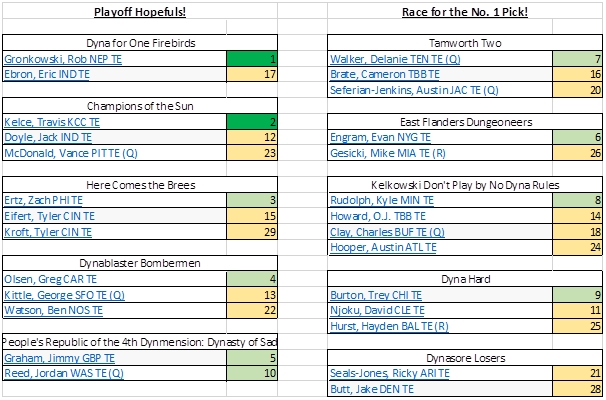 Ian’s fifth table – how many of these do you think there are?

As with QB’s I’ve pretty much ranked TE’s by the no.1 on each roster as we mostly start only one.  Neil and Max have the only 2 studs which puts them top of the pile (although Neil currently can’t afford Gronk – watch this space). Pete’s young TE’s – whilst exiting – look a little weak here and slatz doesn’t own a single TE ranked in the top 20!

Overall Max looks to have the strongest offence grading in the top 3 in each position.  A starting line-up of Brady, Bell, Cook, Ajayi, Hopkins, Julio, Tate, Sanders & Kelce should pile on the points week on week.

Mike isn’t far behind with the strongest group of RB’s and very good WR corps.  QB looks to be his weakness although a Rivers / Goff combo is more than capable of delivering.

Pete & Goody/Mat also boast strong offenses with minimal weaknesses which should enable them to push for the payoffs this year.

And what of Chris?  The Reigning champ is strong at WR but will it be enough to make up for his deficiencies elsewhere, especially RB after Gurley (Shakes fist at 2016 Gurley!)

At the other end of the scale my offense looks dire.  The halcyon days of regular playoff appearances appear to be long gone with a long rebuild process required.  Slatz is in a similar position although his RB’s are showing potential to develop into solid group.

So that’s the easy part done.  Defence is a bit of a different story as there aren’t really the ranks available that represent the depth and scoring in our league to do the same exercise.  After much research I decided the only way to do it was to come up with my own rankings!  To do this I’ve blended together a combination of FFtoday rankings (as these seems the most representative of Dynabowl scoring and have enough depth) and MFL’s own player projections to create a hybrid IDP ranking which definitely provides an undisputable view of who has the strongest D!  So 2 sets of bollocks rankings combined will surely provide a flawless outcome!  That’s the theory (*sigh).

So how does this play out….. 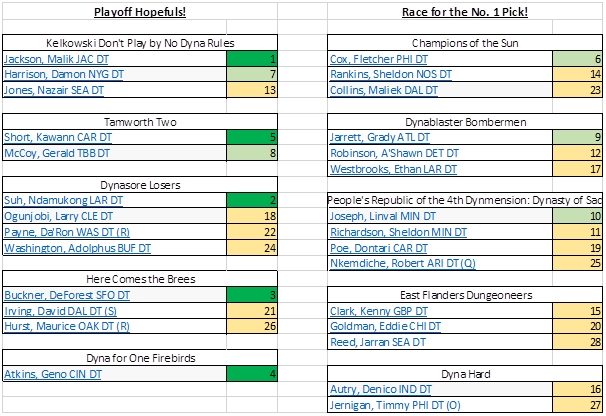 The sixth one. And it’s not the last…

Malik Jackson is the no.1 ranked DT??! What??!  Well that ridicules my ranking system straight away.  What a waste of time!!!!  Seen as it puts me as top ranked I’m going to plough on with this pointless exercise regardless.  With Nose Tackle Damon Harrison also ranked as a starter (jesus what a load of shit) my strength at the position is secure.  I think I’m possibly doing T2 a bit of a disservice putting them below me as their 2 solid starters are clearly the best DT combo in the league.

Pete and Chris have work to do at this position with no DT’s ranked as starters on their roster. 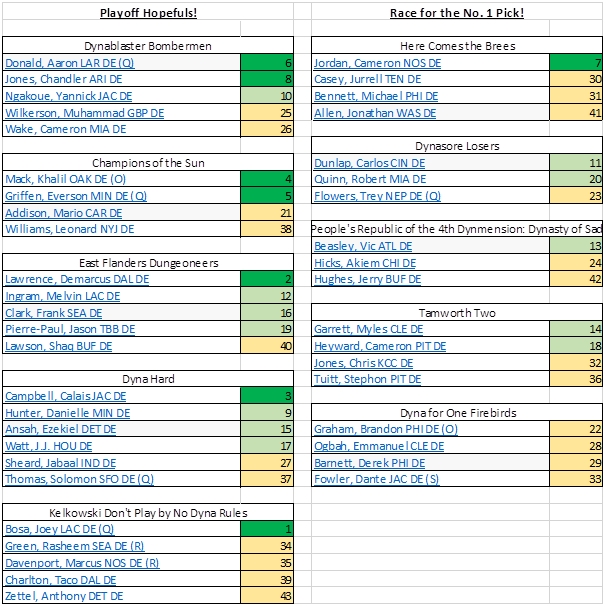 DE is clearly Bendy’s position of strength with 2 studs backed up by another starter.  Max isn’t far behind as he also has 2 studs at the position.  Pete & Chris also look to have a good amount of depth at the top of the rankings although maybe some lineup headaches to come.  Once again I have the number ranked player at the position!

Neil sits at the bottom of the pile for DE’s with no starters on his roster and is the only team with a significant need at this positon. 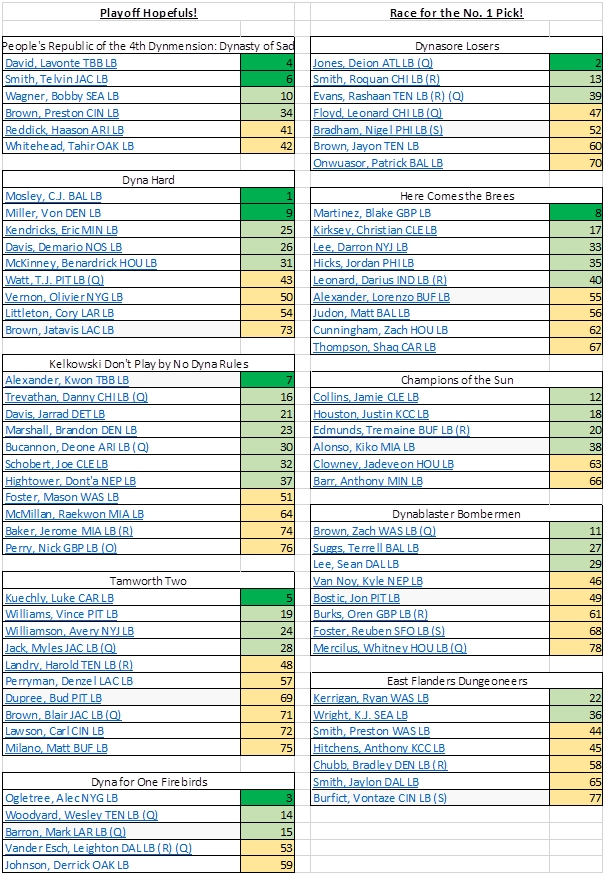 He’s got to be running out of these soon, right?

Mike and Chris sit comfortably atop the LB rankings with 2 studs each plus at least 2 starters to round out their lineups each week.  My group comes next with 1 stud plus a whopping 6 further starts to choose from (trade anyone?!).

Everyone has starters at this position (hard not to when there’s 40 of them!) but Max , Bendy & Pete are the 3 squads without any studs so sit at the bottom of the pile. 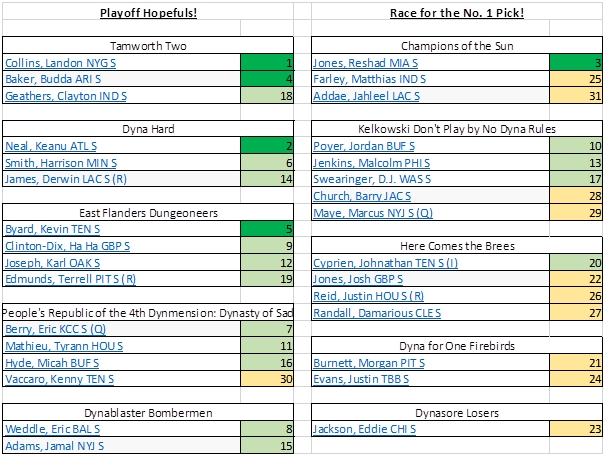 Now this where it starts to get silly.  Both the rankings and stat projections are pretty much completely pointless when it comes to DB’s so drawing any sort of conclusion from this isn’t much use!  Nevertheless here we are…..

Goody / Mat are locked in at Safety with 2 studs and a starter.  Chris and Pete also look to be in a nice position.

Neil and Slate sit at the bottom with Slate boasting only one guy raked as a backup. 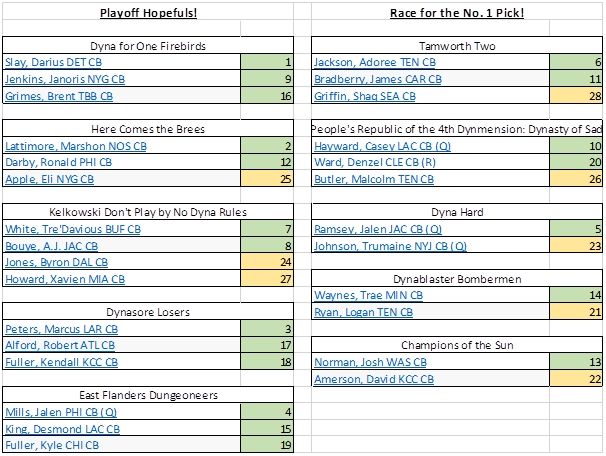 This is just a random set of numbers so I’m not even going to bother commenting.

What to make of that load of Shit?

Goody / Mat, Chris and me seem to have the strongest overall units.  Goody / Mat have no real weak spots on D whilst Chris only has holes at DT and CB and we know how he loves to create work for Bendy by heavily streaming those positions.  I think some dodgy rankings have bumped me up the list a little!

Max grades in the bottom half at each position besides DE so his strong offence will have to work hard to make up for his deficiencies in the D.  Bendy is in a similar position although slightly above Max in most areas.

To be hones after all that I’m none the wiser.  Probably more confused even!!  The way I see there’s a fairly clear split between who’s going to be challenging for the playoffs and who’s battling for that No.1 pick.  The winner as usual will probably be decided by Kickers & Punters.  So in no particular order –

Fighting for No.1 Pick