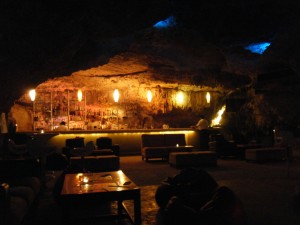 Meeting: A secluded corner of the Cave Bar

Our interview is far from conventional. He insists we meet downstairs in a darkened corner of a bar called The Cave which fully lives up to its name, with its craggy stone walls and the lingering feeling you’re going to be trapped down there forever, hopefully without the creatures from The Descent.

He arrives late, constantly looking over both shoulders. He’s unnerved. Uncomfortable. And in disguise. Or is he? A disguise should make you blend in, make people ignore you, pay no attention. He is wearing a number 9 black New Orleans Saints shirt, fitted underneath with NFL shoulder pads (but none of the other padding) and he wears a Drew Brees mask over his face. If I hadn’t been warned, I think I would have run a mile.

This is Ben Archer, co-manager with Dan Sayles of one of the DynaBowl franchises, the name for which is not up for discussion, I am told in no uncertain terms. It’s only speculation, but I can’t help wondering if the reason for this is that Sayles will not tolerate talk of calling the team the Saints. It’s certainly clear that there’s plenty Sayles won’t tolerate and that’s the reason Archer insists on our meeting being so clandestine. I’m not sure if he really grasps the fact that our conversation is being recorded and will, ultimately, be published for all to see. Including Sayles.

I ask him if Sayles is easier to work with than he is to interview and it’s obvious that Archer is rattled. I’m afraid he’s going to bolt. Perhaps I should have started with something easier.

“Dan is a private man, and wouldn’t be happy if he knew I was talking to you today,” he says, as if that’s not obvious. “But that privacy is all part of a cunning… Oh wait I can’t talk about that. Don’t put that in the interview right, it’s just between us. I’ll start again, Dan is a private man but a damn fine manager, only this morning we were talking draft tactics and he said… No wait, I can’t say that either, you nearly caught me out there. You won’t include any of this right? I’ll try again. Dan is a private man, a damn fine manager and I expect good things from this partnership. He’s the brains, I’m the other one.”

The last sentence appears to be the first one that Archer is completely comfortable saying.

I try to take things are from the subject of Sayles and on to something he feels he can talk freely about, but when I query his crumbling in the latter stages of the 2013 Chatterbowl season he makes a startling admission. “I blame the stresses of being in China on that scouting trip, I told Dan that I wouldn’t be able to find a Chinese guy to play quarterback and I was right, they’re just too small. Even if they are bigger than Drew Brees.”

The DynaBowl wasn’t announced until after Archer returned from China, his team-up with Sayles until well into 2014. Is this just another sign of the mental hold Sayles has over Archer or is there something more suspicious going on? Was Sayles responsible for the bad decision making at the core of Archer’s capitulation? Archer clams up when I press him on the matter. Instead, he has alighted on the one matter he is happy to talk freely about, even if he’s not allowed to.

Me: “Who are you targeting in the auction?”

Archer: “I am not allowed to talk about signing Drew Brees in the first round.” 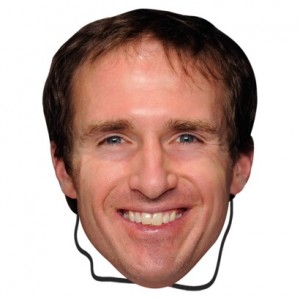 Have you seen this man? Brees mask on the loose

Me: “Is Drew Brees the source of much conflict between you and Dan Sayles?”

Archer: “I am not allowed to talk about spending every dollar we have on Drew Brees.”

Me: “What do you see as the primary differences between the Chatterbowl and The DynaBowl?”

Archer: “I really want to sign Drew Brees, I will have to beg Dan.”

Me: “Are you up to speed on the rules? There have been murmurings of discontent from other league members about having to read a Russian novel of a rulebook.”

Me: “Drew Brees isn’t 6 feet tall. Anyway, what do you think your chances are in The DynaBowl? When might you get your hands on the trophy?”

Archer: “Just going back to Brees, no other quarterback has put up his kind of numbers ever. Back to back to back 5000+ yards passing, with more than 40 TDs in two of those seasons. The only quarterback ever with 4 5000+ yards seasons. I mean what a guy.”

At this point in our talk Archer excuses himself to go to the bathroom and I am left grateful. His excitement is palpable, perhaps a little too palpable, but seemingly pointed in the wrong direction. Fortunately, when he returns he’s able to talk a little more coherently, the descent into madness abated, however briefly. I steer the conversation away from football to establish some firmer ground.

Once upon a time Archer had a burgeoning career in statistical analysis, a dream that has died a Brees-related death, but I take him back to those happy days, a time when he completed his degree based on the analysis of baseball. His system flushed, he finally pulls the Brees mask off his face and, with a twinkle in his eye, momentarily drifts back in time.

“Baseball has always been my passion, the fresh smell of the outfield grass, the crack of bat on the ball, and there’s no reason I can’t take that kind of level of statistical analysis to the gridiron. I’ve been pulling data recently for a statistical model but it all depends on the final scoring system which I believe will be finalised soon. Then I can really start crunching some numbers.”

Whether Sayles allows him to or takes any notice is a different matter entirely, of course. So how is the draft board coming in preparation for the auction?

“The prep is going well, the draft board is taking shape, we have our main targets, first and foremost is of course… No wait, you’re good at this, you lulled me in and almost got me to tell you our strategy there. You’re keeping me on edge here. I thought you said this was a relaxed interview. The questions are too probing, can we just move on?”

“Who are the biggest threats then? Who do you think will rival you to take the title?” I ask, before my mischievous side takes over and I add “Besides anyone fielding Brees.”

“No one… No one else is taking Brees. He’s mine, he’s mine.” He takes a moment, breathing deep, calming himself. “Rivals. Well, everyone’s a rival. But I guess the main one would be D-slatz [David Slater, GM of the Dynasore Losers]. He talks a big game but he needs to be taken down a peg or two. I mean what has he ever won? As for the winner? Well I’d say the Commish himself stands the best chance as he’s likely the only one that really understands the rules.”

He pauses, pulls the mask back down over his face, stands up and says in a very threatening tone “But no one is taking Drew Brees away from me.”

And with that he runs away from the table and up the stairs shouting “I’m Drew Brees. Me. I am him. I am Drew Brees”. And then he’s gone, and I can feel the whole establishment breathe a sigh of relief.