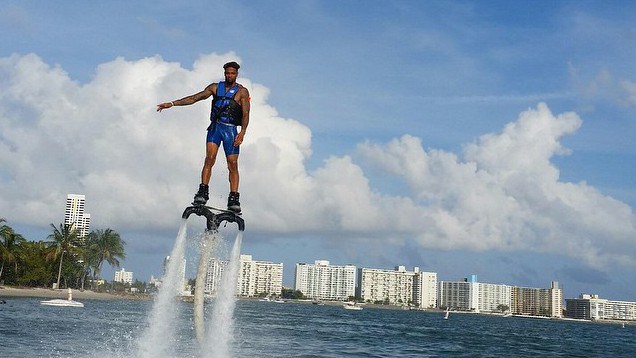 The 2014 DynaBowl season is in the books and the 2015 rookie draft is just around the corner so now seems like a good time to look back at how the 2014 rookie draft might have gone, had it been a thing and had we known what we know now about the last year’s rookies.

I’m not looking at this from a team need perspective, merely ranking the players in the order that I might have had them on my draft board if I knew then what I know now. Maybe.

Also, the player most likely to become a super hero.

The consensus number 2 rookie last year is the number 2 rookie in this revision. Only he’s behind a different guy this time. He’s very tall, which may help prevent some of the many INTs Jameis Winston is going to try to throw this year.

Had a more typical rookie WR season, and one which, in normal years, would be considered outstanding. Last year was not a normal year for rookie WRs. If Buffalo ever find someone who can throw a football (or even look like they’ve seen a football before), he could turn out to be very special indeed.

A weak year for rookie running backs, but Hill overcame the odds and has left the Bengals with a nice decision to make over how best to utilise him and Geovani Bernard.

He got injured, yes, but that doesn’t really matter for this. The key was he looked like he belonged and, given his mentality, he’s only likely to improve. May not become an elite guy – he’s too small for that – but if he becomes Randall Cobb 2.0 I’ll be very happy.

He was basically the only WR the Panthers had last year. Now they have Funchess to play opposite him he won’t attract quite so much attention. However, he drops a few too many balls. Improve that stat and he would leap a few slots.

The Eagles have slowly removed every other potential WR1 from their books leaving Matthews as the main man. For now. Agholor could change that, but, for now, the leading WR in a Chip Kelly offense is a desirable component.

Had a time share role with Frank Gore and showed he can be a solid, though not spectacular back. Probably a FF RB2 going forward now that the job is his alone to lose.

OBJ’s college roommate. The pair practiced one-handed catches together. The Dolphins now have a crowded roster with Stills, Cameron, and the newly signed DeVante Parker, but Landry could play a big role going forward.

Came in as the third man in line but Doug Martin is made of biscuits and the Buccs are thought to be promoting Sims to starter for 2015.

Terrible pro-day and his hands are too small. Isn’t that the received wisdom? In 2014 he was head and shoulders above the other rookie QBs.

Solid first season that would be seen a good building block for a rookie WR were it not for every WR above him on this list.

Showed some decent glimpses in a time-share role with Matt Asiata and with AP’s role up in the air a chance could be there for the taking. Or he could be Christine Michael in colder climes and never amount to anything.

Had a fast start to his time in the league and managed to be one of the best defensive Bears – a title with much competition. Finished 2nd in CB points for the year. Spectacular arrival.

Showed enough potential to get Raiders fans very excited. As the team rebuilds, should become the leader on defence and could become something pretty special.

An excellent first season, placing 12th overall in the league for CB points, and behind only Fuller in the rookie positional ratings.

The first real skill position player to make the list.